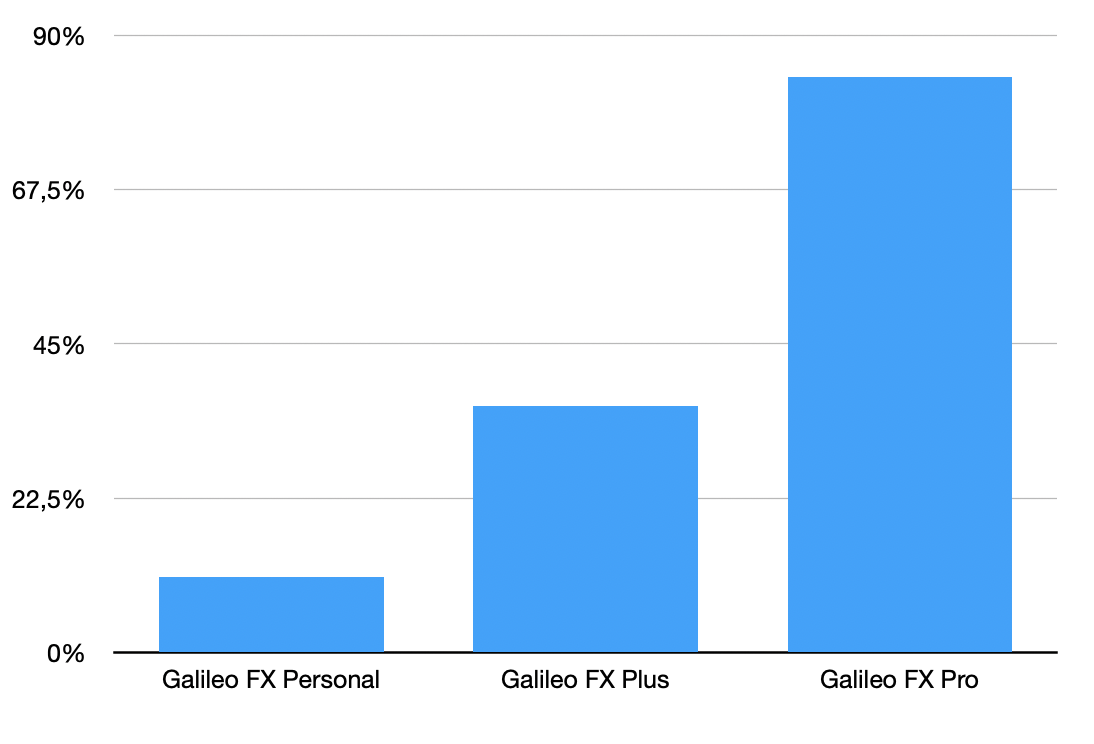 My results with the 3 different versions

Let’s start with the return on the investment (ROI) for each version. Keep in mind that these are my own results — but it should give you an idea.

Galileo FX Personal vs Plus vs Pro

I recommend the Plus or Pro version of Galileo FX, which has higher accuracy, speed, and profitability.

Galileo FX’s new Pro version is much faster than the low-price Personal, and its profitability is so good that you should almost never need to change settings during the day if you don’t want to.

I recommend Galileo FX Personal or Plus if you have time to monitor Galileo FX at least once a day.

And unlike other Galileo FX versions, the Pro version doesn’t require constant monitoring, which keeps it very profitable even when you’re not watching it or monitoring it.

I don’t recommend the Personal version of Galileo FX, which starts at $249 and is limited to only $1,000 in profits per month.

In my opinion, Galileo FX Personal’s accuracy isn’t as good, and it’s not as fast (at least, when you’re running multiple currency pairs) as Galileo FX Plus or Pro.

Personal: 1 or 2 currency pairs at the same time

Plus: 2–4 currency pair at the same time

And in the long run, I think the Pro version is likely to give you a much higher ROI without any limitation.

First, I want to say the set up is quick and easy.

It took me around 2 minutes to install Galileo FX.

Installation has been simplified and isn’t as big of a problem as it used to be.

I am not a computer geek however this took no time to complete.

The zip file included everything that I needed to set up.

All I did was move the files and restart MetaTrader.

Start with these settings:

Consecutive Bullish/Bearish signals Explanation
This is the most important setting of Galileo FX. It instructs the software when it should buy or sell. If it’s set low (1–3), the bot will trade with higher risk and higher reward, if it’s set high (7–10), Galileo FX will make fewer trades.

Here is my MyFXBook test of Galileo FX Pro. I started with $1632 deposit.

I decided to try this as an alternative to buying another trading course. I was totally shocked at the profitability and over all return on the investment. Also, I was surprised to realize Galileo FX provided a number of ready-to-use presets and settings free of any additional charges. I highly recommend this to any one considering this option. Best money ever spent!

Galileo FX customer service support is available around the clock 24/7. I have sent 2 emails, the first time it took them 18 hours to reply (a bit too much). The second time it took them 5 minutes. Overall, a good experience.

Code “SPECIAL20” to save 20% off the full price. Add code on payment page.

Have you tried Galileo FX? Share your Galileo FX Review & Opinion in the comments.